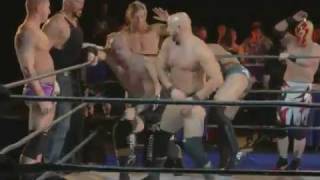 So Jeff Katz’ much ballyhooed and then much maligned Wrestling Retribution Project has finally emerged from the internet ether with its first footage. Katz put out a statement, which I read via Pro Wrestling Ponderings’ Facebook page, about what caused the project to disappear and why it’s reappearing now, which I’ll let you read for yourself if you’re interested. What I’d rather write about is the video itself.

First things first, you should check out the video HERE. The password is whattooksolongkatz.

Okay, so to start with, a lot of what I have to say here might be changed by seeing this match in the context of the entire show and not as an isolated event, but my initial impression is that the costs involved in producing this were absurd considering the quality of the product. I’m sure payroll was hefty, given the number of guys that needed to be flown in and then put up in hotels, as well as the fact that the crowd were all paid extras, but I’ve seen indy shows with better production value that had 2-3% of WRP’s budget.

The camera work needs to be called out here, as it’s particularly clunky. Even after being edited, stuff that’s being highlighted by the commentators is flat-out missed by the cameras being out of position. There’s no hard camera that is set up to get the entire ring in a single shot, which results in a cutting between several roaming cameras which are all basically getting the same shot from different directions. This gives the video a weird swaying quality whenever there’s a cut between the cameras, like the viewer is just floating in circles around the ring. As a result, there are also issues with what parts of the action the cameras are actually getting, as I mentioned earlier. While missing spots is certainly egregious on such a scripted show (moreso than a normal show, I’ll get to that), a lot of the shots gave me the impression that the camera men weren’t told what they were supposed to be focusing on at any given time in the match, and so they just guessed. In a normal indy battle royale, that would probably be fine, but in a match which is clearly developing multiple stories, somebody should have been directing the cameras. At one point just before the 19:50 mark of the video, the camera man gets a close-up of the mat. Yes, just the mat. Nobody was on it. It was just the mat, and the ring rope. And that got left in on the final edit. A hundred thousand dollar budget got less competent video than my local indy shows get with a two camera set-up and an editor who cuts the entire show for a couple hundred bucks.

Now, WRP is a project that was set up to take an HBO approach to professional wrestling, with tightly scripted stories told over a series of episodes with a beginning, middle, and end. Cool. Sounds like a good idea. The problem is that telling a tightly scripted story with the aforementioned production buffoonery is nigh-impossible, because while the wrestlers in the ring are trying to convey subtle emotions through facial expressions and the way they execute their spots, the production is shooting the wrong thing half the time. Compounding that issue, the commentary team of Jeff Katz and Nigel McGuinness (who seemed to be using a different name for this, but I didn’t catch what it was). Compared to his ROH work, Nigel sounded like he had been shotgunning bottles of Nyquil and then trying to read a script that was mounted on spinning cartoon newspapers. Jeff Katz, on the other hand, just kind of sucked. The play-by-play guy is supposed to be the audience’s guide through the stories and verbally manipulating where they are placing their attention in a match like this. Katz instead chose to constantly mention how impossible it is to call that much action in between tortured attempts to get himself over with clumsy attempts to breathe new life into wrestling cliches. Nigel, on the other hand, just sleepily threw cliches out whenever it was his turn to talk, presumably keen to return to the state of Nyquil-based hibernation that emerged from to call the match. Overall, the storytelling was reduced to sloppy mentions of rivalries that were budding or escalating just as one of the people involved in said rivalry was eliminated.

Now, the big angle of the battle royale was actually pretty interesting, and something that could definitely only be done in a super-scripted setting. If you plan to watch the video, but haven’t yet, go watch it before you read the rest of this so I don’t spoil it for you.

At the end of the battle royale, with Joey Ryan’s “Chase Walker” character having fought valiantly through a knee injury only to be suckered by MVP’s “Lord of War,” Walker was dejected in the ring when the Illuminati, eliminated earlier in the bout, returned. Bobby Hollywood (Kevin Matthews) proved to be pretty excellent on the stick while Stan Shooter (Kenny Dykstra) proved to be… also there. Anyway, Hollwyood cut a very good promo about twist-endings in movies, then revealed that he had a twist of his own, before outing Chase Walker as gay. Now, given that it’s pro wrestling, this was done using a pair of F words. Now, here’s the part that wouldn’t work with a standard wrestling audience: the fans rallied behind Walker, because as paid extras, that’s what they were told to do. If this angle had happened in front of a normal wrestling crowd, Walker would have been booed mercilessly and the Illuminati would have been babyfaces because homophobia. Walker ran off the Illuminati by jumping Bobby Hollywood, and was then consoled by his now-revealed-to-be-fake girlfriend as he limped backstage, unable to say his piece on the mic.

Now, this angle was brilliantly executed, except for one thing: the commentary. Jeff Katz immediately busted out his “Owen” voice. Instead of letting the angle play out in silence, which would have been narratively the strongest way to emphasize its importance, Katz and Nigel chipped in with murmured assertions that what was happening was not okay. Which is a fine stance for the commentators to take, by the way, they just should have taken it after Walker left and the scene was over.

As a first impression of what was supposed to be a groundbreaking project, this battle royale left me firmly entrenched in a state of “meh.” If the entire series is available for free, I’ll watch it, because I think it’s a concept with potential, but I don’t think I’d buy it based on what I’ve seen so far.