From December 9th, 1984, Ric Flair defends his NWA World Heavyweight Championship against All Japan star Genichiro Tenryu in a 2 out of 3 falls match. And yes, I keep posting AJPW matches. No, it’s not on purpose, it just seems to be the case that matches that are catching my interest lately are from All Japan. There’s a few more G1 Climax 24 matches I intend to watch, though, so I’m sure New Japan will get some more representation on the blog as well.

Flair in Japan is always a little weird to me, whether it be All or New Japan. I’m not sure his style really meshes with the Japanese style, as Flair matches are usually built around convincing the audience that Flair’s opponent is going to beat him, then snatching that hope away when Flair cheats to win. In Japan, Flair is mostly just a guy whose offence isn’t all that impressive, and who gets his ass kicked… but then he wins or there’s a fuck finish to protect his title. It’s strange to watch.

This match DID surprise me with Flair busting out an actually effective Figure Four. Then again, in ’84 it probably hadn’t ascended to its later status of “worst protected finisher of all time.”

I don’t have a lot to say about Tenryu in the context of this match. He’s the same Tenryu as always, but younger, so he’s a little quicker.

I didn’t know this match existed until earlier today, and it was one of those situations where I needed to watch it IMMEDIATELY. Satoshi Kojima is a wrestler that I dig quite a bit, and who just had a fantastic string of performances in the G1 Climax 24. Sadly, a lot of Kojima’s prime is lost on far too many wrestling fans because it took place in All Japan post-NOAH split. For example, this match.

I didn’t know Mitsuharu Misawa ever returned to AJPW after the NOAH split, and I certainly didn’t know that he wrestled Kojima during Kojima’s prime. It’s also before Misawa started to really show the effects of the All Japan style on his body, so this is a pretty impressive showing all around. Except for the part where Misawa fucks up his fake dive taunt. That’s kind of funny and kind of sad simultaneously.

But enough of my ravings, just watch these guys shit-kick each other in a hidden gem from post-NOAH-split All Japan.

At the time of this post, the 2014 G1 Climax is still ongoing. This match, from Day 7, was one that I heard so much hype about that I had to go out of my way to find it. That was a good use of time, because this match is fantastic.

A bit of background is probably helpful here. The G1 is an annual round-robin tournament, in which wrestlers are divided into two “blocks,” each containing half of the competitors. Each wrestler faces every other wrestler in his block, and the one with the most points (awarded for winning) advances to the finals to face the winner of the block.

AJ Styles, since leaving TNA, has primarily been wrestling for New Japan, where he took over leadership of Bullet Club from Prince Devitt. Bullet Club is a stable of foreign wrestlers who are pretty much reliving the fantasies of 14 year old boys who wanted to be in the nWo. Styles won the IWGP Heavyweight Championship in his first match, but has really been upping his game in the G1. Bullet Club’s schtick is running in at every opportunity, which is a rarity in New Japan, so fans get PISSED when it happens.

Minoru Suzuki is a veteran of both pro wrestling and mixed martial arts, and also a huge dickhead. And man, does he have FUN being a huge dickhead. He also leads a faction called Suzuki-gun (Suzuki’s Army), which includes a lot of people WWE fans would recognize, such as TAKA Michinoku (who is mostly a manager now), Lance Archer (formerly Vance Archer/Lance Hoyt/Dallas), Davey Boy Smith Jr. (DH Smith), and Shelton Benjamin.

And that’s about all you need to know to enjoy Suzuki and Styles beating the fuck out of each other.

This match is a much different type of offering than what I usually post on the blog. I’ve been on a streak of posting all-time classic All Japan Pro Wrestling epics, but this match popped up as Puroresu Spirit’s match of the day, and it intrigued me.

K-Office is a Japanese indy promotion run by Kensuke Sasaki, and this match reminded me of the kind of match that would main event an indy show. There’s everything an American indy fan would recognize – crazy-ass suplexes, some crowd brawling, and a FUCKLOAD of kicks. Seriously. A fuckload. That actually took the match down a level for me, because goddammit this isn’t K-1, you’re allowed to grab people.

The wrestlers in this match reminded me a lot of watching a local indy, which is what made me want to post this bout despite not being as impressed as some by MAD KICKZ YO. I feel like I’ve seen this combination of wrestlers many times before at local indy shows, except none of them were Japanese. Although I’m sure some of them claimed to be, because that’s a thing that happens fairly regularly on my local indies.

BxB Hulk is the biggest name here, and rose to fame in the Dragon Gate promotion. He’s the equivalent of the guy that a local indy brings in from TNA. The kind of audience willing to go to an indy show knows who he is, but you’re not going to see his best here. He’ll also probably be protected in the booking, since he’ll be perceived as “better” than his opponents.

Fujita Jr Hayato is the indy guy who shows promise, but doesn’t really look like a wrestler. Dude’s gotta be what, 100 pounds?

Katsuhiko Nakajima is the top guy in the indy who is way too good to be there, but hasn’t gotten a shot to climb the ladder. He’s pretty rad.

Kengo Mashimo is also there. He’s the middle ground between Fujita Jr and Nakajima. He looks the part, but seems to be in the spot where he belongs.

Anyway, watch all these archetypes beat the shit out of each other and learn that the Japanese also fudge their math.

The entire Hockeypocalypse series will be available on comiXology! Issue 1 debuted on June 25th, so grab it while it’s brand new and give it a rating to spread the word!

ComiXology is the biggest platform that my work has been available on thus far, so I’m very excited about it. 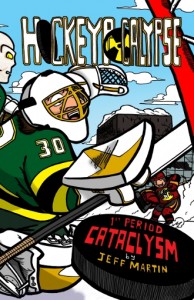