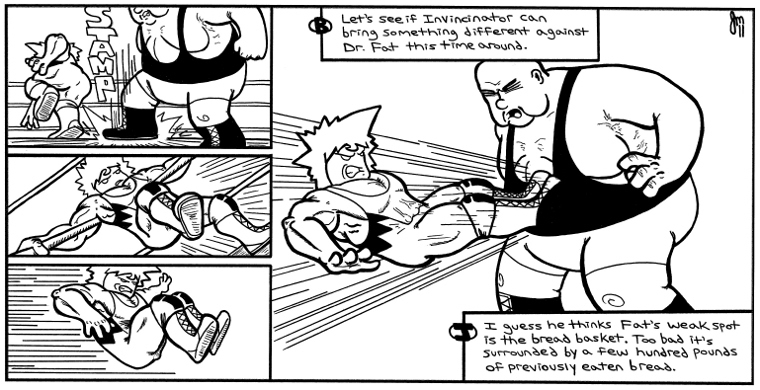 John Bradley’s line about Dr. Fat’s breadbasket being surrounded by a few hundred pounds of previously eaten bread is the kind of line that makes me love writing this comic, because in the context of the series it’s not even that weird. Art-wise, I put the WWE photos back to work on the dropkick, which used a few different photos for reference. The third panel was from Daniel Bryan’s front dropkick off the top rope, and the last panel is a combination of said dropkick and a Gail Kim dropkick, the photo of which may be some of the only evidence that she’s actually employed by that company. I’ve drawn wrestlers hitting the ropes so much that I can do it from memory, but Invincinator being short and hitting the middle rope, a la Rey Mysterio Jr, was inexplicably challenging.

I also expanded my wrestling DVD collection a bit this afternoon after some fortuitous raiding of the clearance section at Zellers. After wading through easily a hundred old UFC DVDs I found the ECW December to Dismember PPV from 2006 (which I vaguely remember hearing was terrible, but it’s been pretty good so far) and The Spectacular Legacy of the AWA, which I’m looking forward to, especially if it’s in the same quality range as the Rise and Fall of WCW and ECW DVDs. Although for five bucks it doesn’t exactly have a high bar to clear.

On Saturday: Does kicking a fat man in the fat actually do any damage? If so, can Invincinator capitalize? Why am I asking you when I already know the answer? Just read it on Saturday.