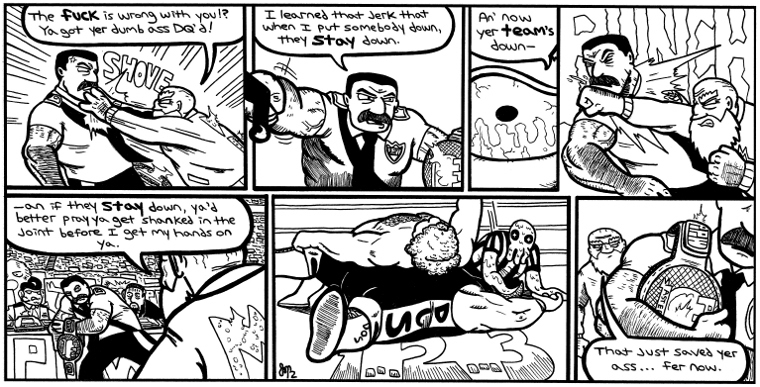 So this one’s a few hours late, because apparently going out on a Saturday night and remembering to update the comic before I leave isn’t a thing my brain comprehends.

I really don’t have much to say about this page, other than that drawing it reminded me that I’ve managed to go over 200 pages (if you count the Classic Wrestling Moments, and since I had to draw them, I do) without actually designing anything to go in the middle of the Asteroid Belt. At first it was because it wasn’t seen close up so it didn’t matter, but after that I just never really bothered to do it. Kind of like how I didn’t bother to come up with a decent Galactic Wrestling belt until I absolutely couldn’t stand the original piece of crap that I drew any longer. God that first GW title belt was awful. Although now that I think about it I’m not entirely sure the new belt has been seen in the comic aside from the bonus story in the first print volume. In that case, go order the first print volume! Actually, just do that anyway. You get a slick collection of the first 100 strips plus a ton of bonus content, and I get a few bucks. Win-win.

Next Saturday: We’re down to the final four in the Super Max Challenge Cup Finals! 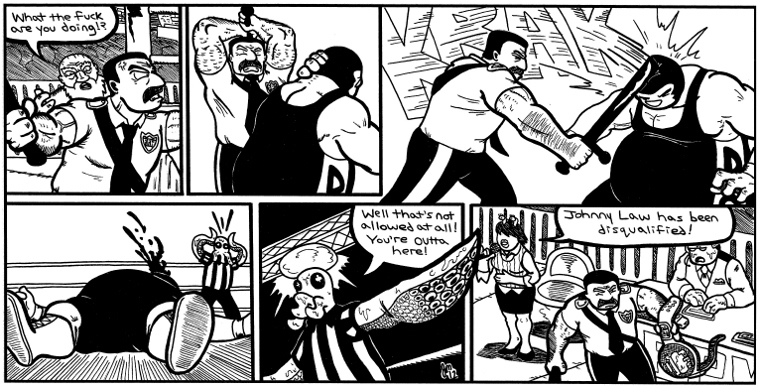 This page has been done for a few weeks, but I wasn’t home yesterday and forgot to post it early. Go me. I did check out last night’s Real Canadian Wrestling show, though, so look for the show review for that one at some point next week. Preview: it was better than last time.

I tried really hard to come up with a title joke that referenced the title of HEAT 141, “El Krak.” There was an illegal immigration joke in there somewhere, but I couldn’t get to it and make it funny.

On Saturday: Mad Doc Crockett is displeased with the way events have unfolded. That’s not a healthy situation for those nearby. 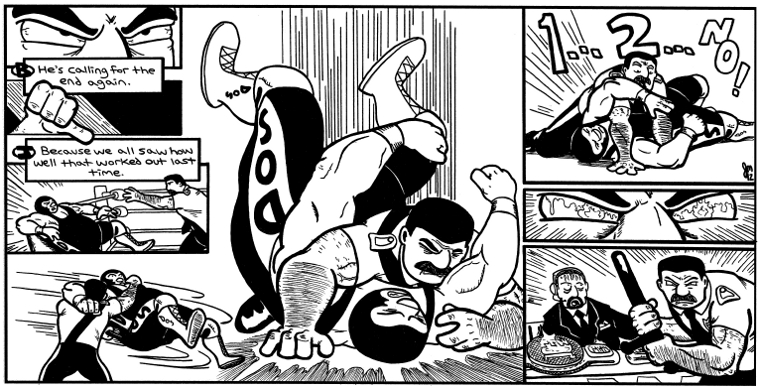 So last week I talked about how easy reference makes drawing some moves, but how some moves are really tough to find decent reference for. The Bossman Slam, it turns out, is a pain in the ass to find reference for, and is also hard to draw because it’s such a weird motion. Most spin moves don’t tend to pull the opponent in and then spin with that momentum, they usually reverse it for the appearance of power instead of finesse. It’s really hard to get that momentum reversal to translate in comics.

I shot some video for FORCE Pro Wrestling this afternoon, then ended up learning how to take back bumps. My back is sore. Are those two things related? POSSIBLY.

Next Saturday: Chekhov’s gun suggests that nightstick MIGHT get used on somebody. 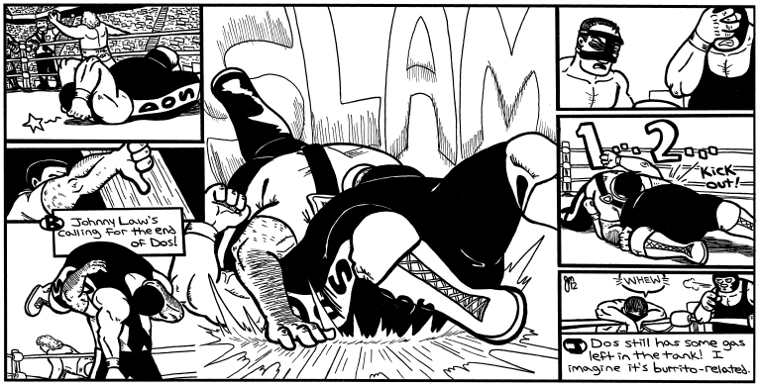 I’m looking forward to my school semester being over so that I have time to draw Grunts (aka super secret side project) AND HEAT at roughly the same pace again, as right now all of HEAT Vol. 2 is written, but I still have a ton of pages left to draw, because this match is loooooong. I mean, it’s an 8 man elimination tag team match, so I suppose that’s normal, but still, very long.

On Saturday: This time it’s definitely all over, says Johnny Law. Because obviously he’s a reliable source on those sorts of things. 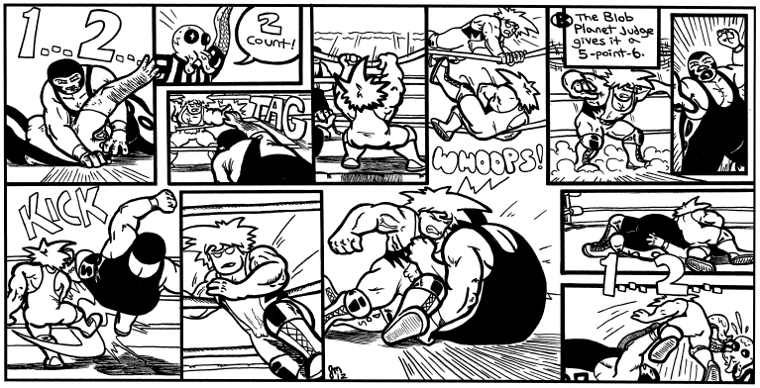 There was a John Bradley line that got cut from this strip because I forgot about it while I was doing the pencils and didn’t leave room for it. Thanks to the magic of the internet, though, you can see it right here! It would have gone in the second last panel.

JOHN/caption: I think that’s the only way Invincinator is ever going to shoulder block anybody in the chest, short of signing in the midget league.

Part of why I forgot about the caption box was because of how hard it was to fit everything onto this page while still making it all make sense, as it turns out a guy snagging himself on the top rope while trying to jump over it is hard to fit into a page when you also need to be able to fit in, y’know, other things. Like the low shoulder block that I totally didn’t steal from Masato Tanaka. Yeah, okay, I’m basically the WWE Superstar of wrestling webcomics: I steal all of my cool moves from Japan. Incidentally, I’m watching New Japan Pro Wrestling’s Wrestle Kingdom VI on DVD right now, and the production value that they get out of their dome shows must give Vince McMahon video screen envy. 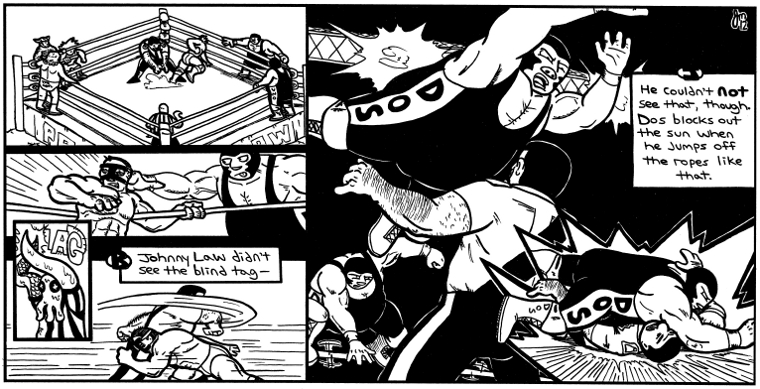 I keep writing in flying cross bodies without remembering that they’re actually pretty difficult to draw, particularly the landing. Good job, me. Then again, I recently drew a powerbomb/cross body combination, so compared to that a normal cross body is pretty pedestrian stuff. I also really like the over-the-post isometric angle that I used in the first panel, which ECW used to use on TV in some of their venues. I’m not sure why it didn’t get used more often, as it’s a pretty unique angle compared to the standard wrestling TV shots. At some point during a FORCE Pro Wrestling production meeting I’m probably going to try to convince somebody that we should use it, if we happen to run a venue that supports it.

Speaking of live pro wrestling, if you missed it earlier this week I posted a review of PWA Fruition 2012, which was headlined by Harry Smith defending the PWA Heavyweight Championship against Chavo Guerrero Jr. You can see the match in it’s entirety right here!

On Saturday: I fought the Law, and it ended up in a shape closely resembling a pancake. Then it tried to tag out. I tried to come up with some sort of syrup joke but they all sounded dirty. 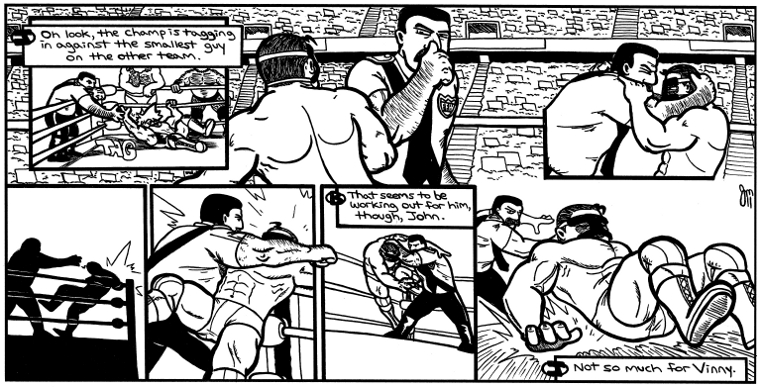 Today’s update is early because I’m going to PWA: Fruition tonight, so I’ll be too busy watching Harry (David Hart) Smith defend the PWA Heavyweight Title against Chavo Guerrero Jr to update later on. Look for the show review on that one in the next few days.

It’s surprisingly difficult to find reference material for a guy getting clotheslined in the corner, which seems very strange to me since it happens in pretty much every match featuring a guy over 250 pounds, and it’s not exactly infrequent amongst smaller guys either. It’s also difficult to draw one of the most cut guys in the match as smaller than other people, even though he is. Apparently watching WWE for years has led me to consider muscle mass and muscle definition as the same thing.

In non-HEAT-related news, I recently watched what may very well by my new favourite tag team match of all time, which I recommend you check out: it’s Ricky Marvin and Kotaro Suzuki defending the GHC Jr. Heavyweight Tag Team Championship against the Briscoe Brothers from ROH Invades Japan Volume 1 (available from Rudo Reels, who are a great source of affordable wrestling!) They also have quite a few contests on Twitter for free stuff, so check ’em out.

Next Saturday: Johnny Law picks on somebody his own size. Sort of. 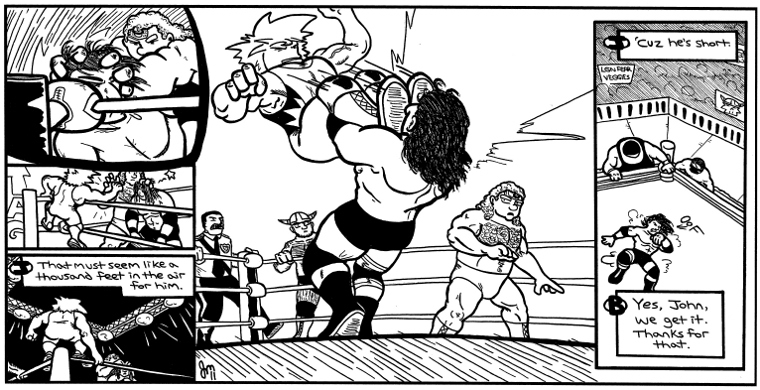 Invincinator continues to do cool stuff in the second update of the new weekly schedule, in this case a Daniel Bryan Danielson-style front missile dropkick. I’m not entirely sure why, but I find top rope moves infinitely less difficult to draw than the preceding panels where the guy is standing on the top rope about to leap.

Next Saturday: Invincinator punches everything that moves until his lungs start to hurt.

HEAT #182 – The Corpse-Scrapers Are On Speed Dial 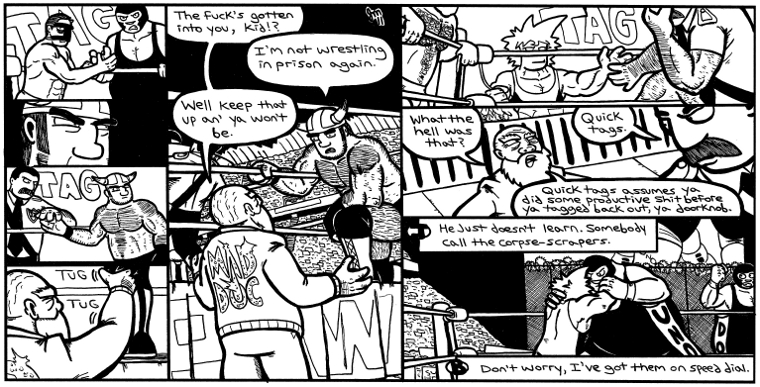 This page may hold the record for most tags in one strip, which is a record which nobody knew existed or cared about until just now, including me. Relatedly, I can’t really think of anything to say about this particular strip, so instead I will direct your attention to this:

I have been named one of Review Fix’s Top 10 Comic Book Writers You Haven’t Read Yet. Pretty fuckin’ cool.

On Wednesday: Does Invincinator find himself squashed like a pancake by Uno, or does he do something productive and wrassler-like? 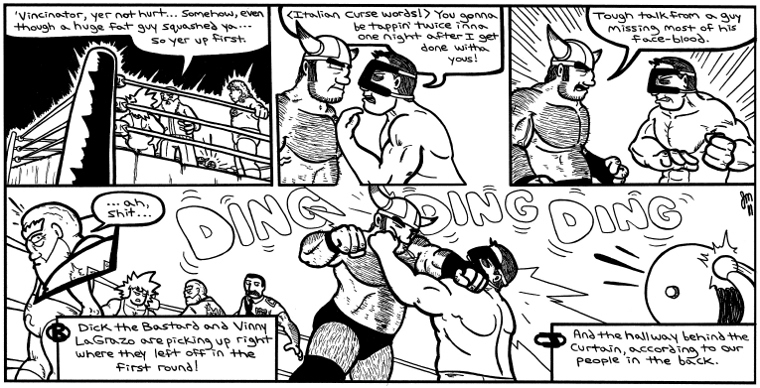 I kind of forgot about this page, but art-wise I’m very proud of it, pretty much all-around. I think the punches were referenced from photos of hockey fights, since simultaneous wrestling punches tend to look kind of stupid as static images (since they’re mostly foot-stamping and no-selling), which is actually something that I’ve noticed while drawing this comic. Good worked punches look great in motion, but really goofy in pictures, so for the most part HEAT wrestlers throw pretty typical comic book punches since they look more natural as still images.

Also, if the Cody Rhodes-loving contingent on my Twitter timeline reads this, they’re probably losing their shit over the Rhodes-inspired face protector that Vinny is wearing to protect his busted nose, although it turned out to look more like a traditional sports noseguard than Rhodes’ super villain mask.

On Wednesday: The punching leads to more punching. And some kicking. General mayhem, really.