Misawa Pro is hopefully a super obvious reference. If not, get on the YouTubes, you’ve got a lot of matches to watch.

I’m watching RAW as I post this, for the first time in probably two months. The wrestling on RAW has been pretty good but holy shit three hours is way too long for a weekly wrestling show. Or at least way too long for the way WWE structures its shows.

In other comic news, Jeff Martin’s War of 1812 is almost done its first chapter. Making comics for money is pretty sweet, I recommend it.

HEAT #247 – The Emerald Grass Of The Alternate Present 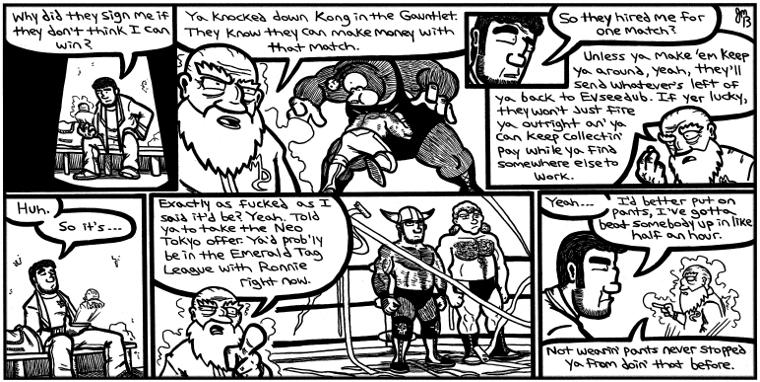 This one’s title sounds like it’s from a sci-fi anthology book. Also, I was doing really good remembering that Mondays exist until yesterday. Stupid Monday.

I really dig the Japanese streamer-throwing during wrestler introductions, but it turns out it’s as much of a pain to draw as it is to clean up.

Next Week: British wrestling chants are the best.

HEAT #232 – It’s All Over, Including Consciousness!

It’s Christmas Eve, so count this as my gift to all of you. Ignore the fact that the Monday schedule was set forever ago with no awareness that Christmas Eve would be a Monday, and with the assumption that I would have gone on break by now. Check back tomorrow for a special bonus update with the annual Christmas Special, and then on New Year’s Eve for the last page of Volume 2!

For those keeping score at home, this elimination leaves us with El Gordinflon Negro Uno and Vinny LaGrazo on Team 17E and just Dick the Bastard on Team 32J. Way to bleed out all of your blood, sustain a head injury, and leave your partner hanging, Ron. Ass.

Vinny LaGrazo is a character who began his existence as a create-a-wrestler on various early 2000s wrestling video games before I brought him out of retirement for HEAT. There are a few more of those on the way in the future, by the way, but why I actually bring that up is because the majority of his big moves are lifted from his Fire Pro Wrestling for Game Boy Advance incarnation. The Sickle Hold was his finisher, because Fire Pro was the first wrestling series I played where submission wrestlers were actually effective and not just a crapshoot. I mean, there were definitely elements of luck involved, but if your character’s offence focused on a body part and then your submissions did as well, you’d get the tap-out. The Fire Thunder Driver was a move that I first saw in video games, since nobody in North America that I was aware of was using it at the time, and was Vinny’s pinfall finisher. Not that he really needed one, but that was how I built create-a-wrestlers at that time. I’ve started playing Fire Pro again recently, and holy crap is that game way better when you actually know who the Japanese guys are. Audience matches might also be one of the most interesting single player modes ever, since most other wrestling games promote winning. In the audience match, you actually have to wrestle a particular style, and you’re graded based on how good your match is in that style. So in the Strong Style mode, which I’ve been playing recently, you can’t just go out there and crush people or your rating will tank. To have a good match you basically need to recreate any match Kobashi had during his two year title run in NOAH.

Next week: Dick the Bastard is the last man standing on his team. Although “standing” is a metaphorical term, as he doesn’t spend a whole lot of time on his feet. Or not in pain.

I very much enjoy sound effects that aren’t even attempting to mimic a sound, they’re just stating what is happening. Hence why every sound effect on this page is just describing what is happening… unless a kick to the face actually makes the sound “Yakuza kick!” I don’t listen closely to the sounds made by face-kicking. I definitely don’t know what sound stepping on the back of somebody’s leg to make them kneel would make, so I went with the well-thought-out sound effect “leg stomp.”

Also, Ron Gould may have more blood outside of him than inside. I’d say “take that” to WWE’s current no blood ever policy, but if they had a guy bleed this much in real life I’m pretty sure he’d die. And if WWE did that, then hardcore indies like CZW would end up with morgues instead of locker rooms to seem more extreme.

Next Week: Does Ron Gould even have blood left? Seriously, somebody should get a medical professional out here. He’s grossing up the ring.

And the comic titles get weirder. Also, early update!

I think I subconsciously ripped this sequence off from every hot tag fire-up in the 1980s, except that there’s no hot tag involved. Atomic drop into the interfering partner, then smashing their heads together? That’s 1980s tag team wrestling right there. Speaking of the 1980s, the reference I used for the atomic drop was from a Hulk Hogan match in the ’80s against somebody I didn’t recognize.

Next week: Vinny goes back to the Yakuza well. Also, Ron Gould continues to bleed all over the place.

Our second Monday update! Whoo! This was drawn during my week and a half period of “oh crap oh crap oh crap my buffer is running out” after I finished drawing Grunts volume 2 (more on that… later, at some point).

The corkscrew plancha is one of those things that seems awesome when I write it but is less awesome when I have to figure out how the hell I’m supposed to draw it. I mean, a fat guy doing a corkscrew is just naturally impressive, but in my imagination it only takes like three seconds for it to happen. Drawing it took a few hours. At some point I’m going to write somebody doing a phoenix splash or a sky twister press. It is at that point that I will know that I definitely hate myself subconsciously.

Next Monday: There will be blood. But no Daniel Day Lewis. Just blood.

I forgot that the page going up today was number 200, because apparently I don’t understand how “counting” works. I’ve been doing sketches for people who donated to the Food Bank all day as part of Happy Harbor Comics’ Free Comic Book Day celebration, which reminds me I’ve had a HEAT-related drawing from last year’s FCBD sitting on my hard drive forever that I should get around to posting.

I’d like to thank all of you for reading this thing for 200 pages, and for however many more pages it ends up going (hint: a lot). The updates have slowed down because of my paid project (it’s a war comic called Grunts which I’ll be able to talk about more soon), but I’m still plugging away at new HEAT pages and hopefully I’ll have the mammoth that is volume 2 ready for Calgary Expo 2013, if not earlier.

On Saturday: Dick the Bastard has a bad back. Nothing an angry fat man does helps that situation.

So this one’s a few hours late, because apparently going out on a Saturday night and remembering to update the comic before I leave isn’t a thing my brain comprehends.

I really don’t have much to say about this page, other than that drawing it reminded me that I’ve managed to go over 200 pages (if you count the Classic Wrestling Moments, and since I had to draw them, I do) without actually designing anything to go in the middle of the Asteroid Belt. At first it was because it wasn’t seen close up so it didn’t matter, but after that I just never really bothered to do it. Kind of like how I didn’t bother to come up with a decent Galactic Wrestling belt until I absolutely couldn’t stand the original piece of crap that I drew any longer. God that first GW title belt was awful. Although now that I think about it I’m not entirely sure the new belt has been seen in the comic aside from the bonus story in the first print volume. In that case, go order the first print volume! Actually, just do that anyway. You get a slick collection of the first 100 strips plus a ton of bonus content, and I get a few bucks. Win-win.

Next Saturday: We’re down to the final four in the Super Max Challenge Cup Finals!

I’m looking forward to my school semester being over so that I have time to draw Grunts (aka super secret side project) AND HEAT at roughly the same pace again, as right now all of HEAT Vol. 2 is written, but I still have a ton of pages left to draw, because this match is loooooong. I mean, it’s an 8 man elimination tag team match, so I suppose that’s normal, but still, very long.

On Saturday: This time it’s definitely all over, says Johnny Law. Because obviously he’s a reliable source on those sorts of things.