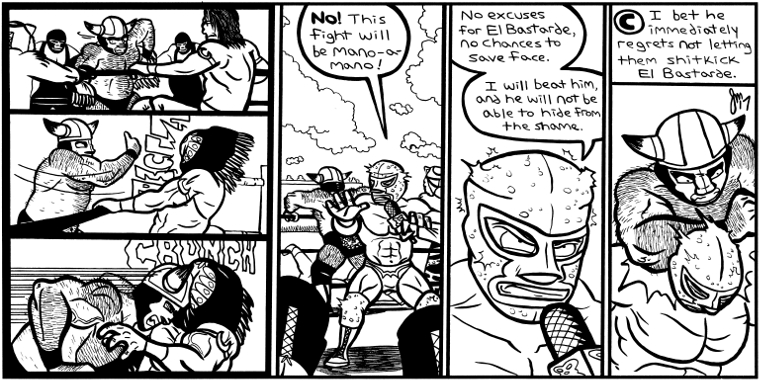 I’m back from the Panel One Comic Creator Festival, which was a ton of fun and left me in my usual post-convention semi-coma. On the plus side, the HEAT buffer has expanded substantially over the last couple of weeks, so I didn’t have to grind out a page in a panic upon my return. Hurray!

Also, my new comic Wrestlemon is available for pre-order! If you like HEAT, you’ll really enjoy it, so please take a look at it.

Next Week: The bell rings and this thing gets underway. Read it early on Patreon!

HEAT #440 – The Train Of Consequences Pulls Into The Station 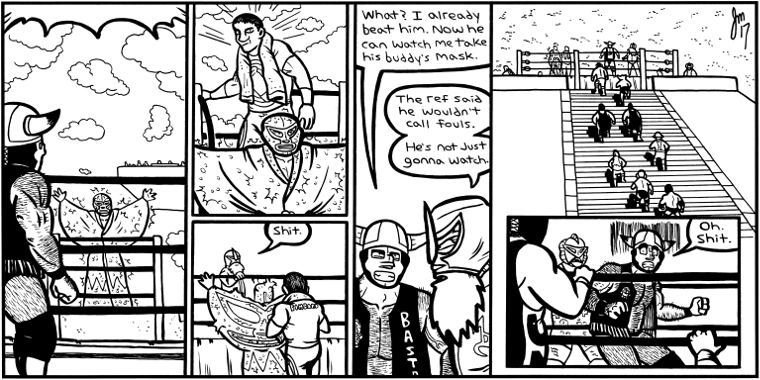 My favourite thing about Dick, from a writing standpoint, is that he’s dumb. It means that any given situation can sneak up on him entirely, and having that kind of freedom is really helpful. It also lets him be boorish and not realize everyone wants to kick his ass, as evidenced above.

Next Week: All those guys get to the top of the stairs, and it’s not going to go great. Read it early on Patreon! 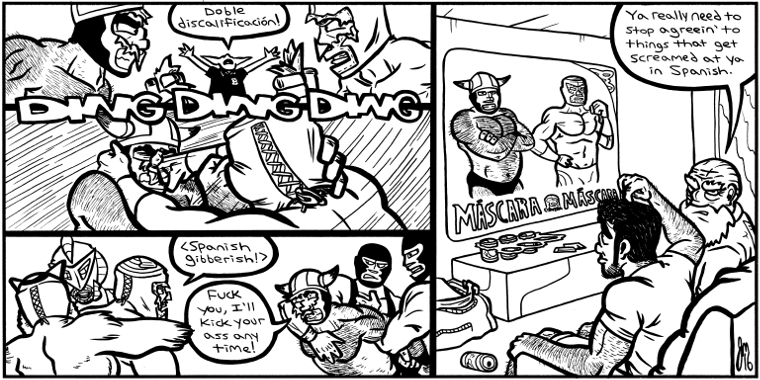 Dick being belligerent about not understanding Spanish started off as a joke and then turned into a plot driver for this entire arc. Think back to when English teachers talk about authorial intent and dissect a work as if it sprang into existence as a finished product… yeah, a lot of that shit is projected onto the work. Every creator I know is doing at least some form of making things up as they go along and just try to make sure it doesn’t negate anything you did earlier.

In other news, I’m going to be appearing at Edmonton Expo from September 23rd through 25th, at booth 1555 (Renegade Arts Entertainment). Want to pick up a copy of Kayfabe, featuring a HEAT short story? Want to pick up a HEAT card game? Something else I make? Drop by and get it signed!

More like “shut up an’ stop your nose from bleeding all over my fists” amirite? Ah? Ah?

As Summerslam creeps up, I’m realizing that I’ve got some conventions quickly approaching. The Red & White Comic & Toy Show in Calgary on September 11th and Edmonton Expo on September 23-25. I’ll be ordering in some copies of the HEAT card game as well as Kayfabe: A Wrestling Anthology for you fine people to acquire at those shows, so be sure to drop by. Can’t make it? You can order a HEAT card game right here: http://www.drivethrucards.com/product/172396/HEAT-The-Space-Age-of-Pro-Wrestling-Card-Game–Prison-Pro-Wrestling-Core-Set.

Next Week: Incredibly technical nose-punching. Read it a week early by becoming a patron on Patreon! 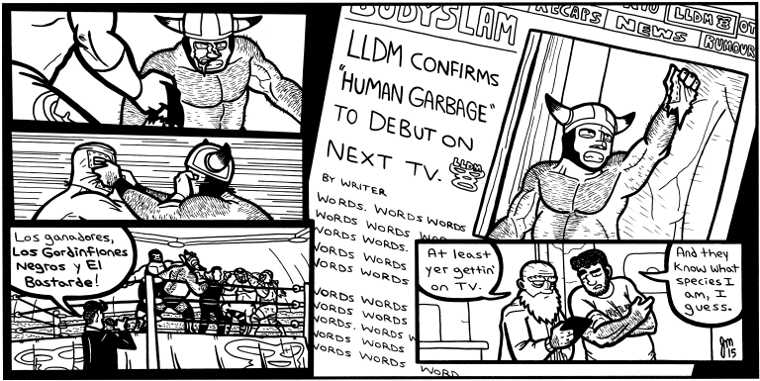 So much mask tearing. What did the masks do to deserve such acrimony!?

Edmonton Expo has come and gone, and I’d like to thank all of you who stopped by the table to chat and get books signed. I will now go into a multi-day coma to recover from three and a half days of continuous social interaction. Next stop, Kelowna Entertainment Expo!

Next Week: TV! Read it now on Patreon!

Because Mermano is a merman, y’see. I’m very clever.

Thanks to everyone who dropped by the Red & White Comics Show to say hi and pick up some comics! It was a fun, bizarre time, because, without leaving my table, I could turn around and watch the Calgary Stampeders practice.

Next up? Edmonton Expo from September 25th-27th!

Next Week: ALLA DEM MASKS GON’ GET RIPPED. Read it now on Patreon! 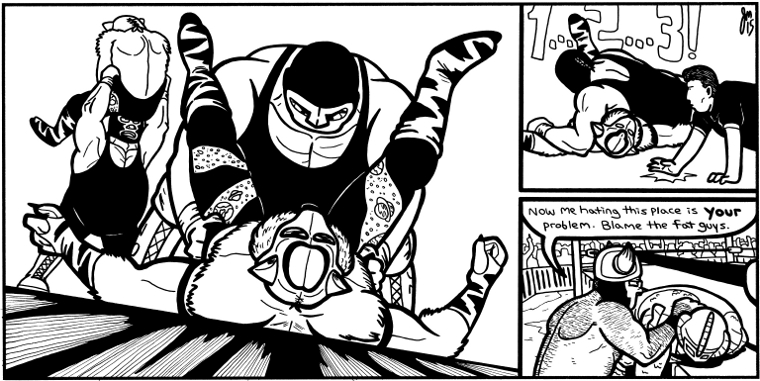 I was going to make a nerdy music joke, then I realized the band I was thinking of was called Star Bomb. Although Tigre Espacio DOES have stars on his pants…

Also, I’d like to welcome all of the new patrons on Patreon! You are truly gods among us mortals.

If you’re in Calgary, check out the Red & White Calgary Comic & Toy Expo on Sunday, September 13th! I’ll be there with some new prints and the new HEAT omnibus! And of course Hockeypocalypse and Redcoats-ish.

Next Week: I see your powerbomb and raise you a… Read it now on Patreon!

HEAT #356 – Spinning Does Not Improve Accuracy 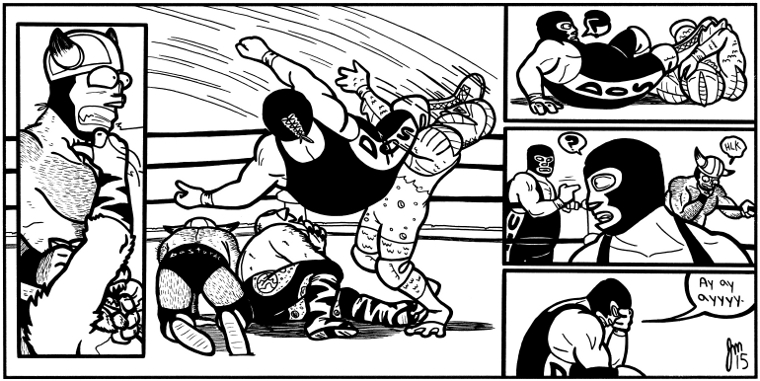 I have returned from Yukomicon! Thanks to everyone who made the convention a great experience! I’m looking forward to heading back up north next year.

I’ve always been intrigued by the idea of spinning making a wrestling move more effective somehow. “All right, I’m going to aim, then spin in a circle and hope that guy is still there so I can smash his face. Oh, and I hope that me awkwardly spinning in a circle actually makes me hit him harder and not just look like a goon.”

Next Week: The concrete floor seems nice this time of year. Read it now on Patreon! 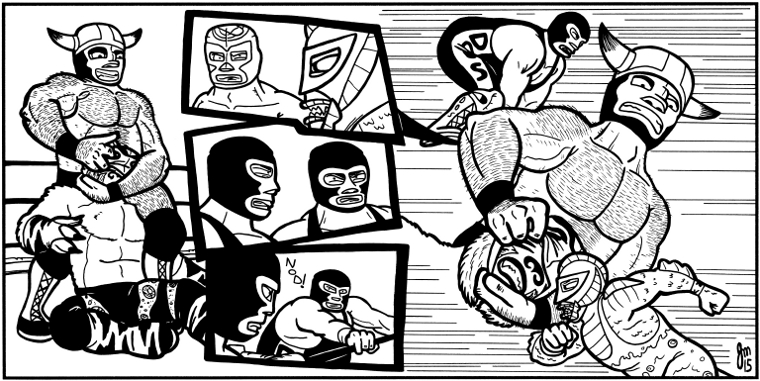 So many meaningful looks! So much non-verbal communication! So much faster to write when I don’t have to come up with dialogue!

Next week’s update is going to be a day or two late, as I’ll be spending the weekend in Whitehorse for Yukomicon! Right after I return, I’ll be doing some press for the HEAT: Super Max Edition signing on August 29th at Variant Edition Comics & Culture in Edmonton!

Next Week: Fatties falling like rain! Support HEAT on Patreon to read it a week early!

HEAT #354 – Some People Call Him A Space Tiger. Others Call Him Maurice. 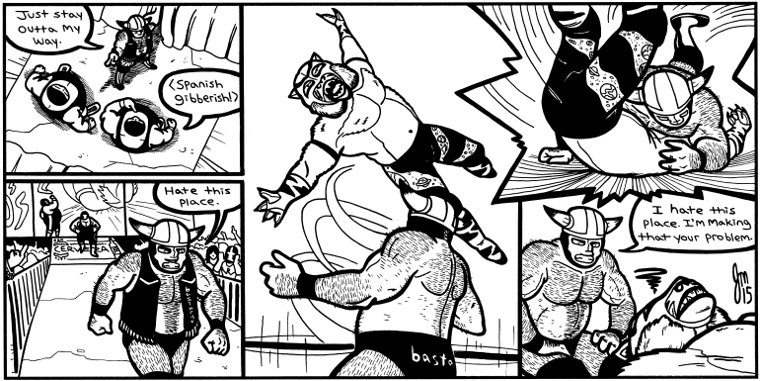 Tigre Espacio was designed while I was drawing the panel with the corkscrew plancha, and ended up being my favourite luchador so far. Apparently not thinking about a character design until I sit down to draw them isn’t as bad of a habit as previously thought.

Also, I announced it on the Facebook page last week, but HEAT: SUPER MAX edition is going to be out in two weeks! There will be more information on how to buy it once they’re out, but if you’re in the Edmonton area I’m going to be doing a book launch/signing at Variant Edition Comics & Culture on August 29th! If you’re in Whitehorse, YT (mathematically speaking, you are probably not), I’ll have copies for sale at Yukomicon 2015 from the 21st to the 23rd of August!

Next Week: Twins are telepaths, right? Also, mask ripping is a party foul here. Read it now on Patreon!