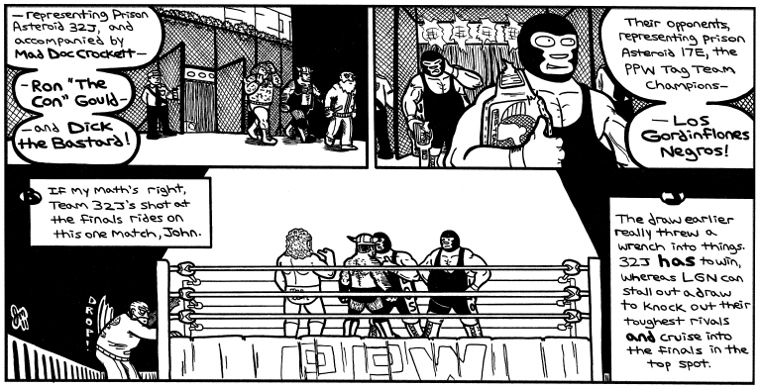 This is, in fact, the first straight-up rematch in the comic. “But Jeff,” you’re totally not saying “the first two matches were Dick the Bastard versus Wooly Bully.” But, fictitious fan, you must take into consideration that the first match was actually a gauntlet featuring two other wrestlers who were destroyed so quickly I didn’t bother to name them, so the following singles match was technically not a rematch.

More entertaining than that explanation is the conversation I just had on Twitter (follow @HEATcomic!) about my desire to see a death match between a bear and forty-two midgets in which floor seats come with plastic ponchos. Because let’s face it, it would pretty much be raining midget bits by the end of that one. If Hulk Hogan steals that idea for his midget wrestling federation (that he’s promoting over TNA, which I find hilarious), I’m going to be super pissed.

On Saturday: Let’s dance. But not literally. By dance I mean fight. With the violence and punch-kicking and whatnot.