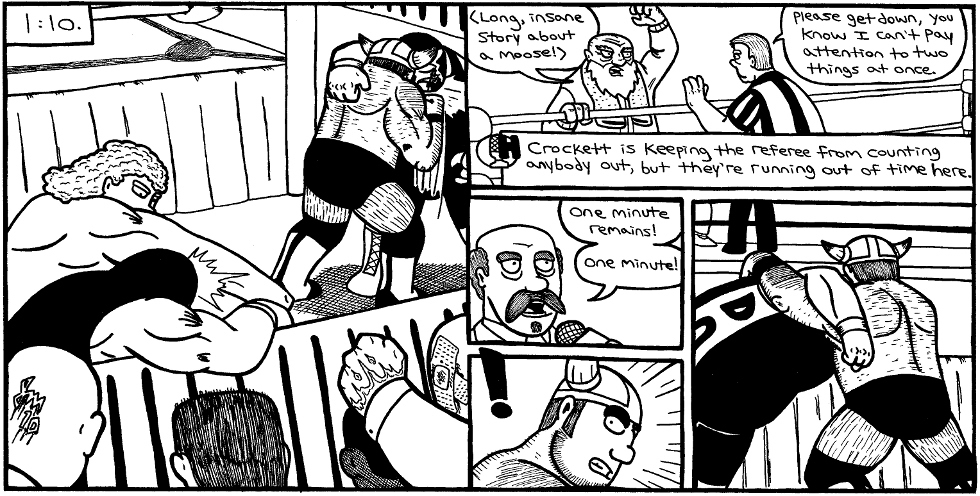 Doc’s “dialogue” is a call-back to HEAT #44’s weird abstract dialogue, which once again turns out to be more entertaining than actual writing. Also, because I forgot to leave space for my signature, it’s carved into the back of an inmate’s head. I know, I know, I went with the cliched “signature-carved-in-a-space-prison-inmate’s-skull” bit. The referee’s line about  not being able to pay attention to two things at once is another nod to the classic incompetent referee. And once again, use caution when reading TV Tropes, because TV Tropes will ruin your life.

This chapter is just about over (page 64 is the last page), after which I’m going to be taking two weeks off from posting new comics to finish up some other projects and rebuild HEAT’s buffer a little bit. I’ve got a full-page spread for the Gateway centenniel comic special due shortly and want to finish off Hell, Inc. #2 (all that’s left are the covers), but while I’m working on those I’ll be posting at least twice a week on this site, probably show recaps or Bodyslam Magazine bits in the blog section. Maybe some stuff from my sketchbook for the Bonus Art section. So worry not, there will be plenty of things to read!

On Wednesday: Under 30 seconds remains!