I’m pretty sure the line “Listen up, you motherfuckers!” is from somewhere, but I can’t remember where. At first I thought it was from the song “Fucking in the Bushes” by Oasis, but upon further review that is not correct. The middle panel with Doc shouting went a lot easier than I expected it to. I went into it anticipating that I would hate my past self for writing that particular panel composition, but once I figured out the perspective I got through it fairly quickly.

Johnny Law will be the first wrestler in the comic currently holding a singles championship to appear in a match when he takes on “Pretty Boy” Paul Meyers, starting on page 120-something. I’m kind of surprised it’ll be taking 120-some pages for that to happen. Before that match, though, Prison Asteroid 56Q’s El Gangster II takes on 17E’s Rod Black. 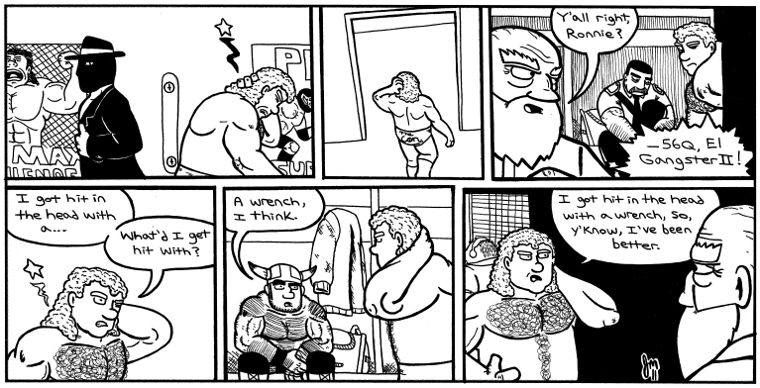 Man, my strip titles are getting long. I almost forgot that it was comic-posting day today, as I was distracted following Ring of Honor and Dragon Gate USA results online. I’m not entirely sure why I’m even interested those results, though, since I don’t really watch either of those promotions. I’d like to, but they don’t come out to Western Canada much and the only real access to them is through DVDs sold online. That sure was an exciting story. 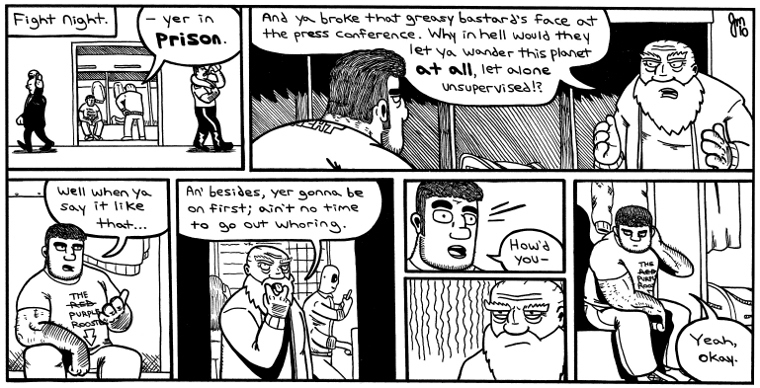 I hope the text on Dick’s t-shirt is as readable to everyone else as it is on my screen, because it’s probably my favourite part of the page. A Terry Taylor reference AND a dick joke at the same time? Yes, that’s how this comic rolls. Doc in panel 4 makes a strong push for being my favourite thing on the page, though.

I meant to talk about it earlier, but the beginning of this chapter got rewritten A LOT. The first draft started with Dick’s first match back in PPW after the Gauntlet, then transitioned to the press conference and stalled out. The match had some decent jokes and a couple of good spots, but ultimately didn’t do a whole lot; the first crack I took at the press conference was similar, except without the decent jokes and good spots. I re-wrote the press conference part, and it still sucked. Eventually I just cut everything and jumped over the time between the Gauntlet and the Super Max Challenge, which finally got me moving again. The first match of the Super Max Challenge will begin next week; if I had stuck to the original script it wouldn’t be happening until around March.

On Saturday: New ring gear is met with jackassery, as is often the case. 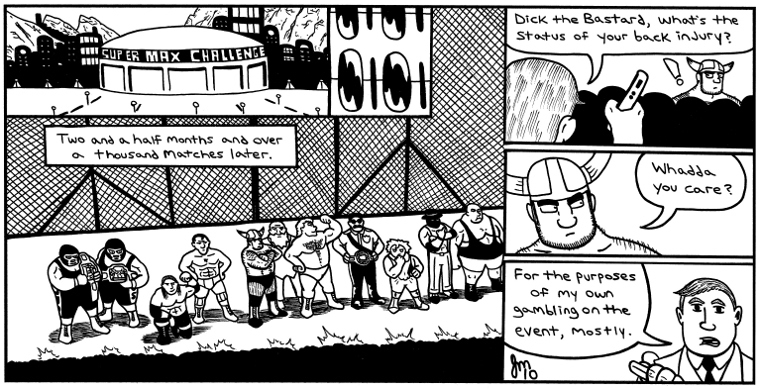 And here we go with Chapter 8! Which is going to be fairly long, in comparison with the previous ones (I wrote page 111 the other day and I’m still not on Chapter 9 yet).

I had actually planned on posting this a lot earlier today, as I was going to be attending the PWA show in Edmonton tonight. Then Snowmageddon dumped two feet of snow onto my driveway and ruined all the roads. Hermit Mode, ENGAGE.

The first little bit of this chapter got re-written a bunch of times because the press conference/publicity photo shoot became way too much like a real press conference. For those of you who’ve had the good fortune to have never seen a press conference, a bunch of reporters ask unimaginative questions to athletes who are trained to respond to them in a series of cliches that convey no insight or value, although they will be reported in such a way as to suggest that these quotes are in fact a fascinating look into the behind-the-scenes elements of sport. Okay, maybe that’s just hockey press conferences. Maybe athletes from other sports aren’t trained from 16 years old to mollify the media with pointless platitudes so that they’ll go away.

That got a little ranty. I think my point was press conferences are boring, so I tried to make this one not be boring.

On Wednesday: Mad Doc Crockett defeats his enemies with math. 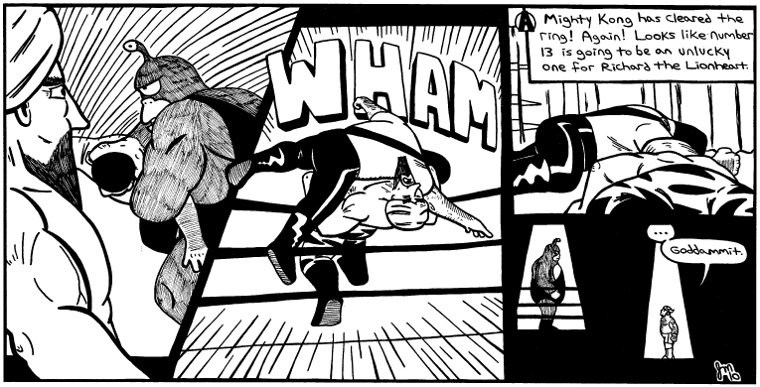 Guess who was watching football and thought it was Sunday! Me! The fact that I’m capable of that level of stupidity makes me a sad panda.

Tiger Khan’s inspiration is basically Great Tiger from Punch-Out!! Except a wrestler instead of a boxer. Which is probably pretty clear from his design. Not that his design was especially vital, since he’s pretty much just getting a wrestler dressed like a cop thrown at him like a missile and then going away.

On Wednesday: Richard the Lionheart takes on Mighty Kong. It’s not a fantastic career move. 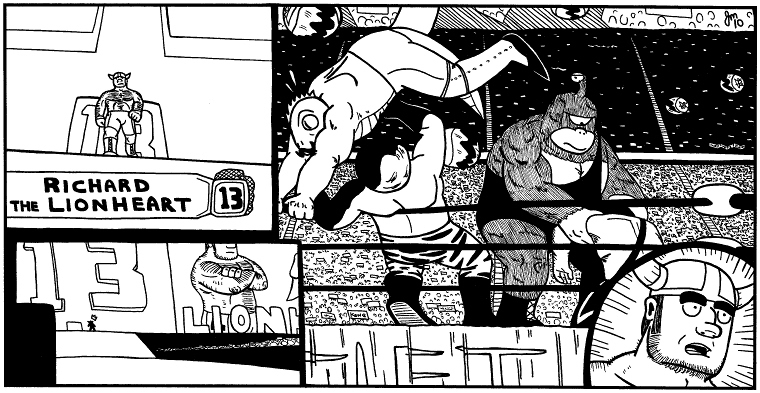 This was a fun page to work on, even if the big panel of the ring was a pain in the butt. The new crowd-rendering technique looks a lot better, I think, especially since on this page you can see it right next to the black-out technique I was using before. I think the logic was that the farther-away part of the stands would be blacked out to make it seem farther away, but I’m not sure it worked all that well.

I also have no idea how to render a brown skin-tone in black and white. I think it’s pretty clear that Tiger Khan is supposed to be Indian, what with “Tiger” being a really common nickname for Indian wrestlers… and, y’know, he’s wearing a turban. Generalissimo Lizardo might be my favourite design of anybody on this whole page. Who doesn’t love a lizard man wearing 1800s military gear and rocking a tiny and inexplicable moustache? People who hate joy, that’s who.

There was originally some commentary by Art Donaghy and Super Destructo II on this page, but it wasn’t funny and basically just a textual description of what you can already see, so I cut it to make more space for art.

On Saturday: Mighty Kong is mighty good at battle royales. Outweighing everyone else in the ring combined helps. 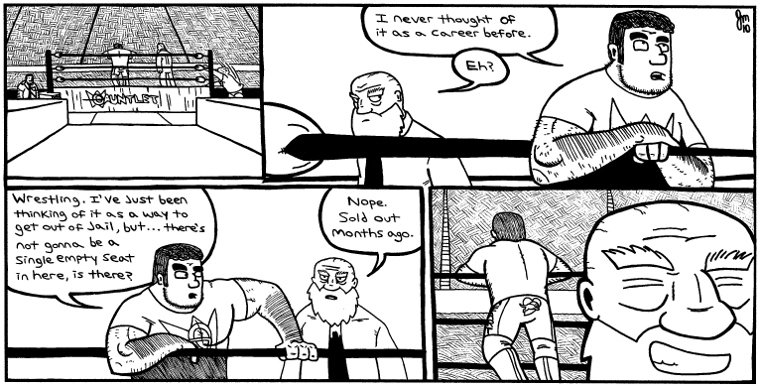 This page uses the same hatching technique in the stands as the last one, except that apparently my pencils were too light so I ended up having to go back over them anyway, thus foiling my attempt to not have to ink. Curse you, harsh realities of scanning line art!

How exactly Mad Doc Crockett managed to wander around in the bowels of the locker room, through the production area, and into the WrestleDome itself without anybody noticing that he’s not actually allowed on the premises… I dunno, what do you I look like, some kinda writer? Oh… wait. Actually, that gets addressed in the next chapter. Which will be starting next Wednesday, after Classic Wrestling Moments #7.

I picked up the new Chris Jericho DVD, Breaking The Code last week. I’m not going to go into full review territory, but you should check it out if you’re even the slightest Jericho fan. I wish the documentary part was longer, though. Not that it’s short (it clocks in at just under three hours), but there were so many stories that I would have liked to hear more about. I haven’t watched all of the matches yet, but so far, so good. The production quality on a few of the early ones is pretty bad, but considering their rarity it’s impressive that they’re in the collection at all.

On Saturday: Mad Doc Crockett makes his Galactic Wrestling debut as a masked menace with a stupid name.

Here’s a far less successful use of the levels trick to avoid having to ink large, tedious areas of seats. On the other hand, this page took significantly less time than the last one and has the added bonus of taking more than two seconds to read. On page 79 I came to the realization that the WrestleDome is waaay easier to draw when it’s full than when it’s empty. And looks better. Speaking of future pages, I’ll be starting page 86 later tonight. Script-wise, I’m on page 104.

Also, two updates in a row that I remembered! Although, truth be told, I nearly forgot again. I blame Hockey Night in Canada.

On Wednesday: Mad Doc Crockett has a proud papa moment. His happiness is somewhat unsettling.

This page likely took you about two seconds to read, but it took me somewhere in the 6-7 hour range to draw. Welcome to the sad reality of comic art. This page probably would have taken even longer if my friend Trevor hadn’t told me about a trick in Photoshop that let me avoid inking the seats.

Incidentally, drawing each individual seat was not a bright idea. Penciling the seats took about four hours. The rest of the arena, including perspective of a circular area (which is a pain in the balls), took maaaybe two hours. And that includes inking.

On Saturday: Galactic Wrestling is great exposure. And not just to unwanted locker room wang. 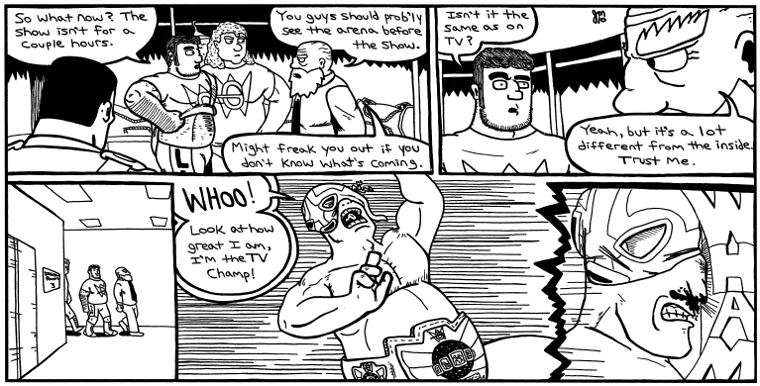 This one demonstrates the science of turning a plot-mover into an inebriated (or just stupid, who knows) naked guy smashing his face into the wall while wearing nothing but the Television Title belt.

This one also demonstrates that I’m an idiot, because all day today I thought it was Sunday, and thus didn’t update the comic. And now it technically is Sunday. On the plus side, I’m about ten minutes way from finishing HEAT #82. It doesn’t feature any naked morons. I know, I know, sad.

Earlier tonight, because I thought it was Sunday and didn’t need to update the comic, I made my debut over at Pro Wrestling Ponderings. In my first cartoon, I ruminate on just how little sense the Undertaker’s gimmick makes. Even by wrestling standards. Drawing it taught me that I’m apparently pretty decent at likenesses, despite not really practicing it at all. I did a pretty sweet portrait of Kaiser Wilhelm of Germany once, though. Which has NOTHING to do with this comic at all.

On Wednesday: The rightful champ gets his belt back. Everybody else kind of wishes it stayed where it was.